Laughter echoes through the room, snowflakes trickle onto the stage from above like in a Frau Holle fairy tale, a flurry of hands reaches up in an attempt to grab a flake. As the flight of snowflakes slowly dies down, all at once the screens that have so far formed the entire backdrop to the action are lowered, revealing a blue sky overcast with sheep. At the end of the play Zutritt gesucht!? the gloomy gray mood clears up – and the members of the ensemble gather in a freeze frame in the center of the stage, close together, hands on the shoulders of their neighbors, a color change of neon orange vests next to mousy gray hoodies.

In the play, the screens are first used as a projection surface for gray wall stone, which immediately catapults the audience into the setting of the castle that gives Kafka's novel its name. Throughout the performance, parallels are drawn skilfully between the text and current issues, between the novel and personal experience. The ensemble tells the story of K., who arrives in a village he does not know, and whose wish to stay turns out to be very complicated due to the non-transparent administration of the castle. Analogously, the everyday realities of people with migration experience are dealt with, who, as arrivals, are confronted with a judging authority that has the power to decide on their further stay.

The play skilfully interweaves the narrated content with the images shown on stage. Coming from offstage, personal accounts of people with refugee experiences resound, telling of a broad spectrum of feelings: First in the language of those affected, anecdotes are told about the first day of school in Germany and the uncertainty felt there, about relief at friendly German teachers, to incomprehension and irritation at never-ending forms and administrative procedures. This polyphony creates a space in which viewers can also question their own understanding of language. The irritation about bureaucratic technical language, which remains closed and incomprehensible, is reflected back to me through the confrontation with languages unknown to me. In contrast to the authentic and personal words, Kafka's artistic language is also interspersed here and there, reinforcing the differences that are negotiated throughout the piece.

The performers themselves appear on stage in two groups. One group represents K., the main character from Kafka's novel, the other the inhabitants of the village. The group representing the villagers, or in a figurative sense the majority society, is dressed entirely in gray, while the persons playing K. and the arrivals, respectively, each wear small additional neon orange details. For example, an orange striped high-visibility vest, a cap or a tie. In the glaring spotlight, the performers are thus unintentionally marked, while the members of the other group in their gray costumes almost completely merge with the gray screens. The members of the majority society hereby represent a unity to which the arriving persons, marked as different by the neon-colored elements, have to assimilate - but this is only possible if they get rid of a part of themselves (embodied by a part of their costume). At the same time, the K. performers cannot hide and are constantly highlighted on stage. This also creates a constant marking of the actors as "different". 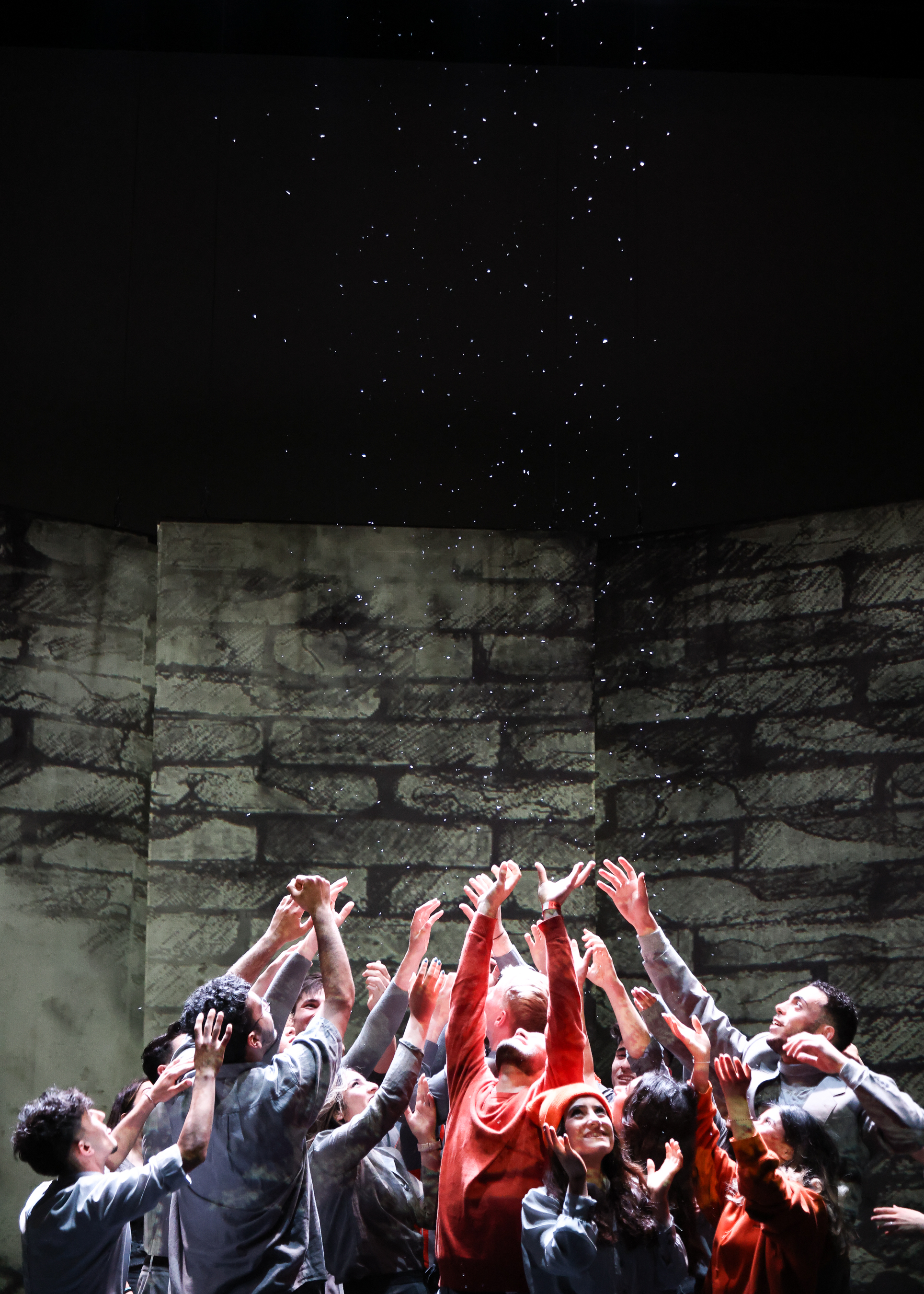 The use of screens as real projection surfaces also opens up spaces for the negotiation of prejudices that people from a majority society project onto refugees, for example. The discrepancies in the relationship between the two groups - the already established structure that denies entry to arrivals - is also strongly emphasized in other scenes. For example, when the performers of K. are placed in a circle and look outward while the villagers creep around them. The focus is rarely on individual performers, most often the performance takes place as a group, which highlights the urgency of the message, but also triggers a sense of togetherness - no one is alone. Everyone falls down together, gets up again, pushes against an invisible wall.

The presence and energy of the ensemble vibrates in the room even after the applause. There is extensive laughter, celebration and dancing during the applause. This apparent solidarity of the performers touches me, especially since the piece was in many points about exactly the opposite: about constructed otherness, about contrasts, lack of understanding, denied access on a multitude of levels. Images are drawn of differences, insecurity and anger, but also of spaces of encounter and a coming together at the end. As a spectator, you get goose bumps - and not only because of the real snow. 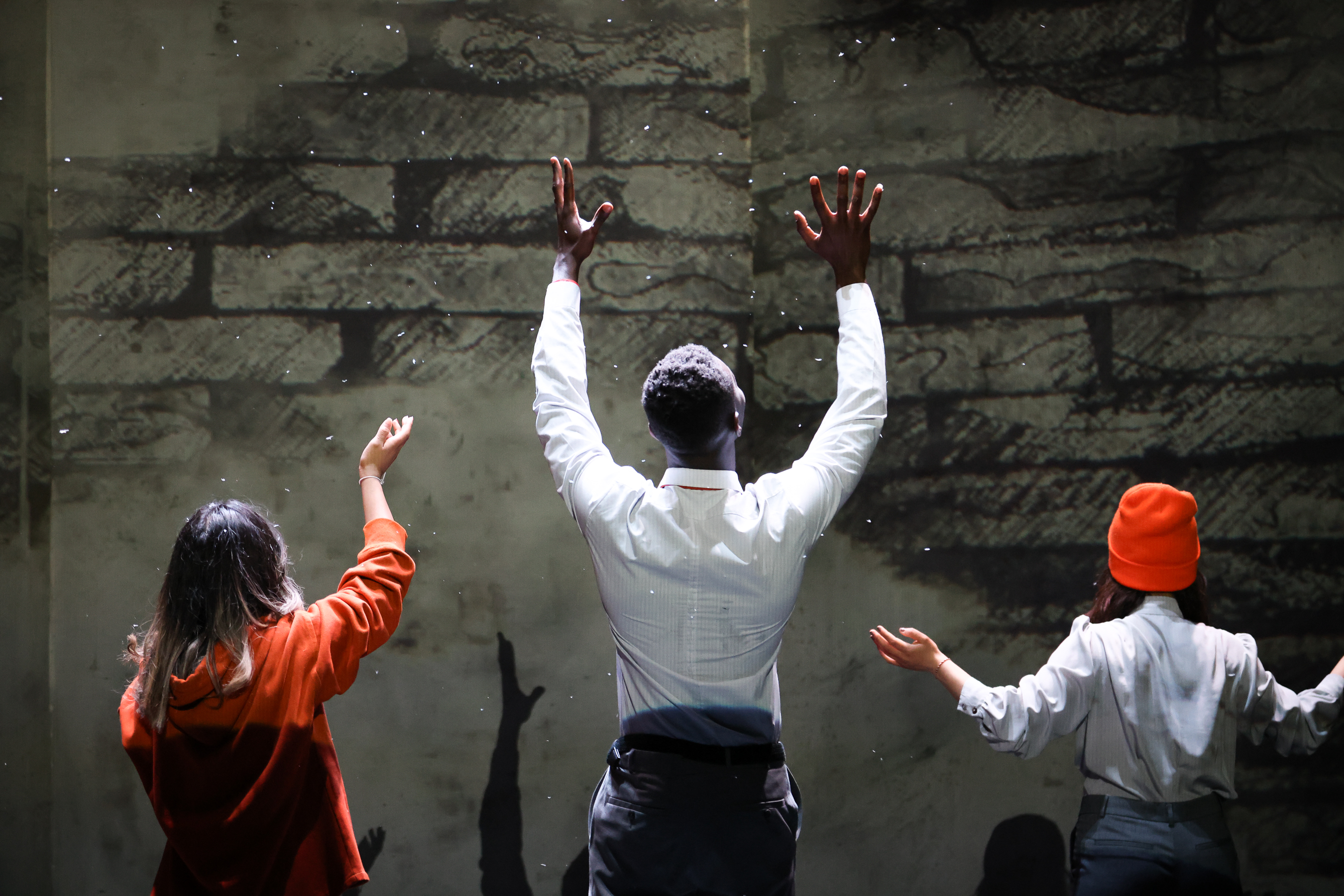